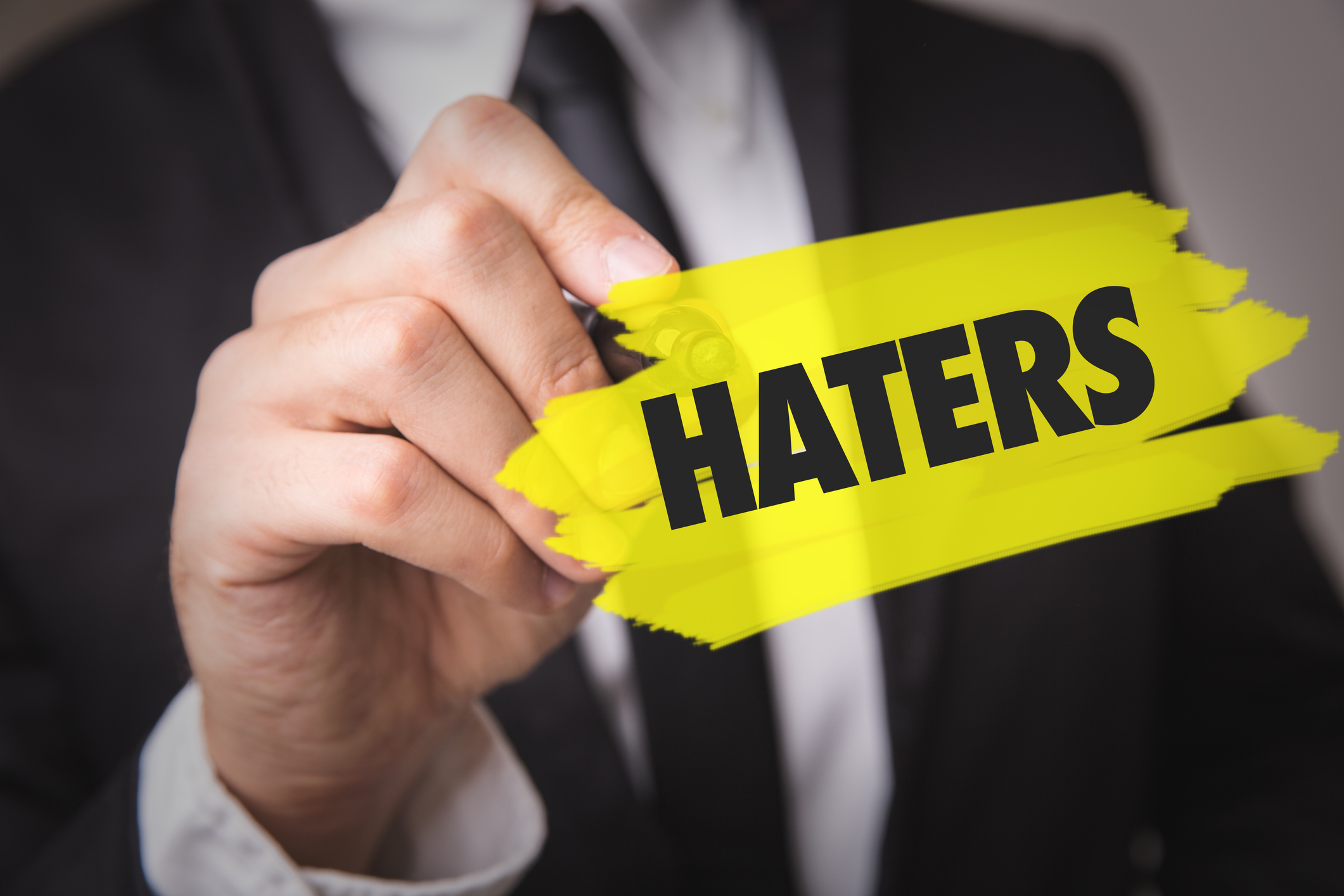 As I’ve observed, most Law of Attraction practitioners and advocates fall into one of two camps. The first believes that any and all “negative” people should be avoided like the plague and that, similarly, we should work hard to repress our own seemingly “negative” emotions or replace them with more “positive” ones. The second believes that “negative” people—haters, naysayers, and detractors—are to be embraced and their “negative” energy used as fuel to propel us in the direction of our own success and prosperity.

I fall into the second camp for many reasons, which I will elaborate on below:

Second, to the extent that “negative” people do exist for you, again, based on your own personal opinions and preferences, it is literally impossible to rid yourself of them or their influence entirely because of the way the Law of Attraction works.

You see, while it is true that, according to the Law of Attraction, like attracts like, which means that we attract to ourselves the people, places, things, and circumstances that align with on an energetic, vibrational level, it also true that like repels dislike, which means that we automatically repulse anything that is not a vibrational match for us (hence why I believe the law should really be called the Law of Attraction and Repulsion).

Fortunately, this means that we are going to manifest not only opportunities to experience exactly what we want, but also opportunities to rid ourselves of that which we don’t, which often take the form of people, places, things, and circumstances we don’t like (or that we disagree with) popping up all around us, if for no other reason than for us to reject and eliminate them from our lives.

A PROCESS OF ELIMINATION

Now, while what I just said may seem to run counter to the teachings of most Law of Attraction advocates, if you take a look around you—that is, if you honestly evaluate the events you’ve had to go through to get to where you are today, vibrationally-speaking—you will see that life is just as much about ridding ourselves of that which we don’t want as it is about receiving that which we do.

Accordingly, it behooves you, going forward, to see your life not as a battle of good versus evil, or of “positive” versus “negative,” but as a process of elimination, whereby you peel back layer after layer of the things you don’t like, like the outer layers of an onion, until you finally reach the inner core of who you truly are—that is, until you find yourself firmly in the frequency (or on the vibrational level, if you will) you believe is best for you.

Think of this process as a kind of spiritual “Spring cleaning”, whereby you “clean up” your vibration by ridding yourself of one toxic relationship, one dead-end job, and one set of limiting beliefs after another, and don’t look upon the appearance of “negativity” either in others or yourself as an indication that something is wrong, but as in indication that everything is right, because you’ve been blessed with an amazing opportunity to, for lack of a better term, take out the trash in your life and replace it with something that is in much better alignment with you.

When you see things this way, you will come to see haters, naysayers, and detractors not as “negative” people to be avoided, but as energetic opportunities to be embraced, because of what I’m about to tell you next, which, if you really pay attention—if you truly absorb, a similar, and apply it—will improve your life significantly:

You have the power to take any energy, whether “positive” or “negative,” that comes your way and transmute it, or transform it, through the art of energetic alchemy, into anything else you prefer—not unlike the ability we all have to take wet clay and mold it onto a bowl, a cup, or anything else we have in mind.

You see, everything in our Universe, including the people, places, things, and circumstances we either attract or repel, are made up of the same energy, the same basic building blocks. And far from being “positive” or “negative,” said energy is neutral and able to be shaped, molded, or made into any experience we want.

For a metaphysician such as myself, it’s really just a matter of taking whatever the Universe gives us, in terms of what shows up in your 3D, physical reality, understanding that what we’re seeing is not reality, per se, but simply a physical translation of symbol of a greater, more etheric reality, and saying to ourselves, “I’m going to take this and that and turn it into something else”—which we do by treating our manifestations like the wet, mold-able lumps of clay they are, mentally rolling them into a ball in our minds, and then using conscious thought to re-shape this into a reality that we find far more suitable for us.

Now, I understand that this may seem complicated at first, but it’s really not, as the only thing it required is a little bit of imagination and the ability to see physical reality for what it is really is, which is not an energetic end-result set in stone, but as a mental construction that can be broken down into bits and pieces and put back together in really any way you want.

So go ahead—give this a shot! The next time someone or something “negative” pops into your life, don’t get angry or upset about it for any considerable length of time; instead, get creative with what you’ve just been given and see what you can re-make or mold all the energy around you, whether “good,” “bad,” or “ugly” into and I can assure you, just as I can assure you that the sun will rise tomorrow, that you will be astounded at how many beautiful things you can build.