Posted By Manifestation Machine on Apr 10, 2018 in Blog, Rabylon | 0 comments 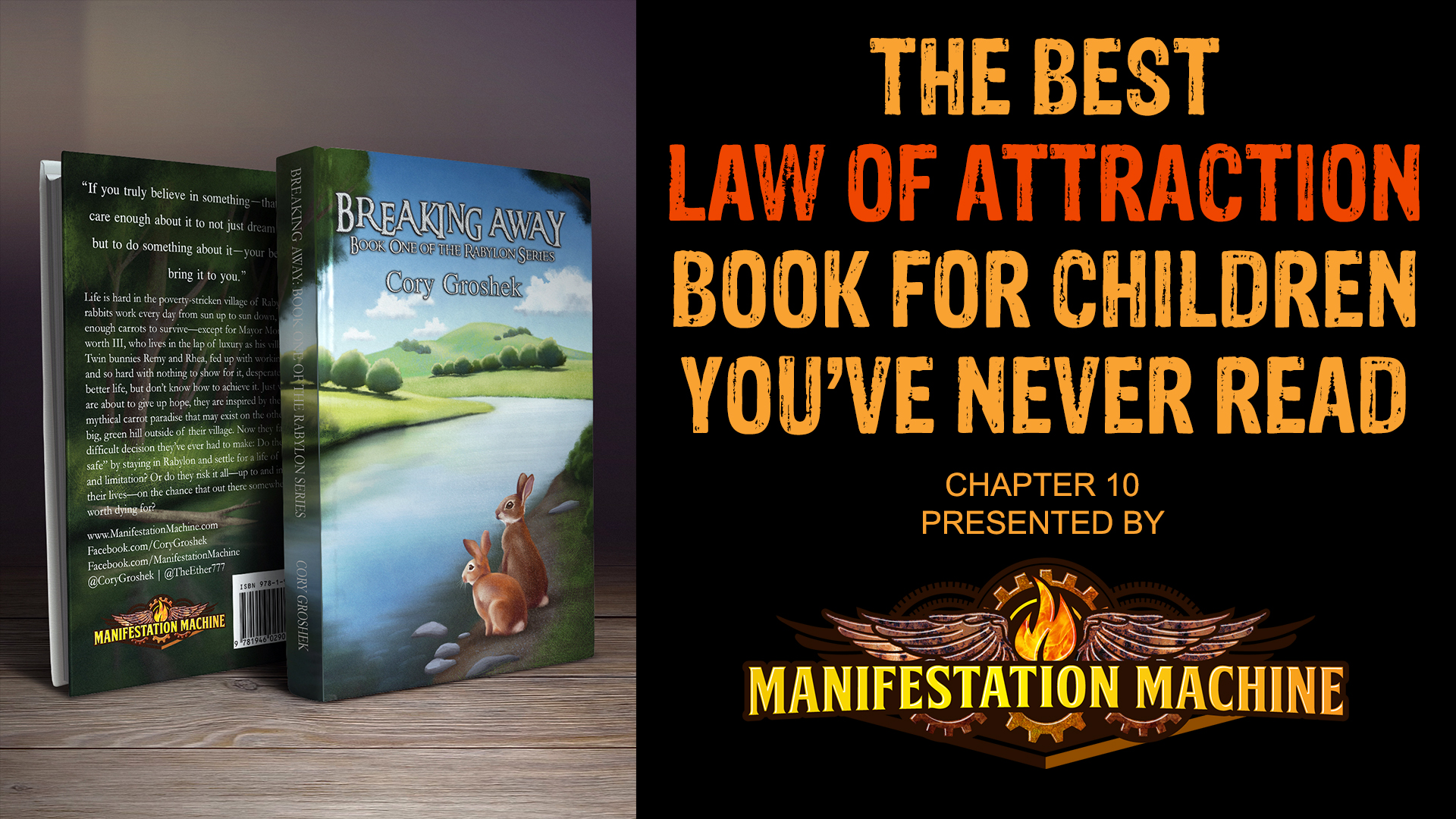 Please find below the complete tenth chapter of Cory Groshek‘s debut, middle grade children’s book, Breaking Away: Book One of the Rabylon Series. It is being provided to you free-of-charge by the author, exclusively through this site and courtesy of Manifestation Machine Books, because the author believes the information contained within the book is simply too important to be given only to those of us (parents, guardians, caretakers, and children) who can afford to pay for it.

(PLEASE NOTE: This book is copyrighted by Cory Groshek and all rights with regards to it are reserved. Accordingly, no part of this publication may be reproduced, stored in a retrieval system, or transmitted in any form or by any means, electronic, mechanical, photocopying, recording, or otherwise (except in the case of brief quotations embodied in critical articles and reviews) without written permission of the publisher (Manifestation Machine). For information regarding permission, write to: Manifestation Machine, Attention: Permissions Department, 300 Packerland Dr # 13464, Green Bay, WI 54307.)

This book, which was written over the course of about 2.5 years by Groshek, encapsulates Groshek’s entire philosophy with regards to dreaming big, taking risks, trusting our gut, and choosing faith over fear in all that we do. Furthermore, the book brings together lessons about the Law of Attraction, the principles of Hermetic philosophy, and the teachings of Jesus Christ relative to abundance in a way that no other book in history has.

Whether we regard this book simply as a “Law of Attraction book for kids”, a self-help book for children cleverly disguised as an action-adventure, or a distinctly spiritual slant on classic storytelling (all of which are accurate descriptions), the fact remains that Breaking Away: Book One of the Rabylon Series stands as the one and only Law of Attraction book in existence today which puts the Law into language our children can understand. It is a must-read for anyone, parent or child, who dreams of someday finding their own abundance on the other side of the obstacles that stand between us and our dreams and should be required reading in every elementary school on Earth.

BREAKING AWAY: BOOK ONE OF THE RABYLON SERIES (Chapter 10)

He didn’t stay sleepy for long. As soon as he saw the ugly, scary face in front of him, his eyes shot open wide and he scooched back so hard that he slammed his back into the tree.

“Well, well, well,” said the big, gray wolf with a smirk. “What do we have here?” He wore a blood red bandana on his head and a black, leather patch over his right eye, a sure sign he’d injured it at some point. Then, without warning, he shoved his long snout into the hollow!

The wolf snapped and snarled, throwing death-scented slobber in every direction. Remy and Rhea tried to scramble backward, but they were already as far inside the tree as they could get. Fortunately, the wolf’s head was too wide to fit entirely inside the hollow, and his fang-filled mouth fell just shy of their bodies. He scrabbled and scratched at the ground with his claws as he tried to shove his wet, drippy nose in just a little bit farther, to no avail. Frustrated, he retracted his snout from the tree and let out an ear-piercing howl.

“Aleister!” barked the wolf as he stood upright, wearing a black, sleeveless leather vest that accentuated the toned, sinew-like muscles beneath the charcoal gray fur on his arms. “Get over here!”

“Sure thing, Snarl!” said a second wolf, “It would be my pleasure!” He was smaller, leaner, and wirier than the first wolf, but his eyes were no less wicked. He quickly dropped onto all fours and scurried over to the tree.

The bunnies shrieked as Aleister’s face popped into view. He shot a long, indifferent look at them that made their hearts seize in their chests.

“Hmmm,” Aleister hummed as he licked his lips, “which of you shall I eat first? The big one or the little one?” He tapped a claw on his chin…and then he lunged!

His vile snout barreled into the hollow, sending the smell of decaying flesh into every inch of it. The bunnies stood on their toes, flattened their bodies against the back of the trunk, and wrapped their ears as tightly as scarves around their heads. They tried desperately to hold their breath to keep their bellies from puffing out, but occasionally had to exhale before inhaling sharply again. Each time they did, the wolf’s clashing, snapping jaws brushed against their fur, leaving putrid trails of saliva behind.

Seconds felt like minutes and minutes felt like hours to the petrified bunnies as Aleister’s assault continued, until he eventually wore himself out. Even then, he didn’t remove his snout from the tree, so neither Remy nor Rhea dared to move. Aleister let out a few irritated growls and then snuffled his shiny, black nose first at Remy and then at Rhea. And then, as suddenly as he’d appeared, he was gone.

“Are you okay?” asked Remy.

“You aren’t going anywhere,” interrupted Snarl, “except in our bellies!”

“In our bellies!” echoed a third, more baritone voice.

Suddenly, the face of a third wolf appeared at the hollow. He was much larger and more thickly-muscled than the other two—so much larger, in fact, that even the size of his head dwarfed theirs. Although there was no way his muzzle could possibly fit inside the tree, he gave it a try anyway. His warm, sticky breath filled the trunk with the stench of rotten meat, causing Remy and Rhea to recoil.

“Doug!” Snarl shouted, “Get out of the way!” He shoved the brawny wolf away from the tree and hunkered low, peering at the bunnies with his one good eye.

Aleister sidled up to Snarl to get another look at the bunnies for himself. “So, which one do you think we should eat first, boss?”

“We’ll eat the larger one right away,” Snarl eyed Remy, “But honestly, neither of them have much meat on them. They’re probably only good for a snack.”

“This is what we’ll do,” continued Snarl. “We’ll eat just one now, and then take the other one back to where it came from. It shouldn’t be too hard to find wherever that is, because these stupid rodents left their scent on everything. Then we’ll tie it to a stake and use it as bait. Every rabbit that comes to its rescue will end up in our bellies!”

“In our bellies!” Doug howled. “Wait—I want them both now!”

“No!” shouted Snarl. “We’ll eat just one now. And with the other one as bait, we’ll catch enough food to last the next five winters!”

“But nothing!” Snarl roared. “Stop your whining! I’m in charge and I say what we will and won’t do around here!”

Suddenly, a voice came from inside the hollow. “Your plan won’t work!” shouted Remy.

Rhea looked curiously at her brother, unsure of what he was up to.

“Oh, really,” said Snarl smugly. “And why exactly is that?”

All three wolves turned their attention to the bold little bunny.

“Because we’re traitors,” said Remy. “We were just about to be executed before we ran away from home, so no one will come to our rescue.”

Snarl squinted hard at Remy. Rabbits, he thought, were too stupid to come up with a lie so clever, so surely this dumb little bunny had to be telling the truth.

Aleister hunkered down in front of the hollow. “You may very well be traitors,” he said, “but I bet your family still cares about you. And what about your friends, eh? I bet they still like you enough to help you.”

Every hair on Rhea’s hide stood on end. The wolf was right! she thought; Mama and Papa and Grandpa probably missed her and Remy a lot!

“Shut up!” Snarl slapped the colossal canine on the back of his head.

“You know, boss,” Aleister shrugged, “maybe we could just eat them both now…” He paused to wait for his leader’s reaction.

“We don’t need a live rabbit for bait. We can just skin these two, stuff their hides full of leaves, and use those for bait instead. Rabbits are too dumb to know the difference.”

“You know,” Snarl patted Aleister on his back and squeezed his shoulder, “I like the way you think! Let’s do that.”

The bunnies’ faces turned pale as a sly grin came across Aleister’s face.

“Time to eat!” Doug howled. He was so happy that he flopped onto the dirt and rolled around.

Aleister leaned in close to the bunnies and smirked. “Appetizers for now,” the bottomless pits of his evil eyes threatened to swallow the bunnies whole, “and later, the main course.”

If you like what you’ve read here today, please be aware that Breaking Away: Book One of the Rabylon Series by Cory Groshek is also available in the following formats:

Thank you so much for taking time out of your busy schedule to be here today! We hope you’ve enjoyed reading this post as much as we enjoyed creating it!

Manifestation Machine is a personal growth and development brand based in Green Bay, Wisconsin which specializes in teaching success-oriented individuals how to create their own reality through the conscious control of their thoughts, feelings, beliefs, words, and actions.