The WWE’s Roman Reigns: Living Proof That Being Hated Means You’ve Made It

Home » Blog » The WWE’s Roman Reigns: Living Proof That Being Hated Means You’ve Made It

The WWE’s Roman Reigns: Living Proof That Being Hated Means You’ve Made It 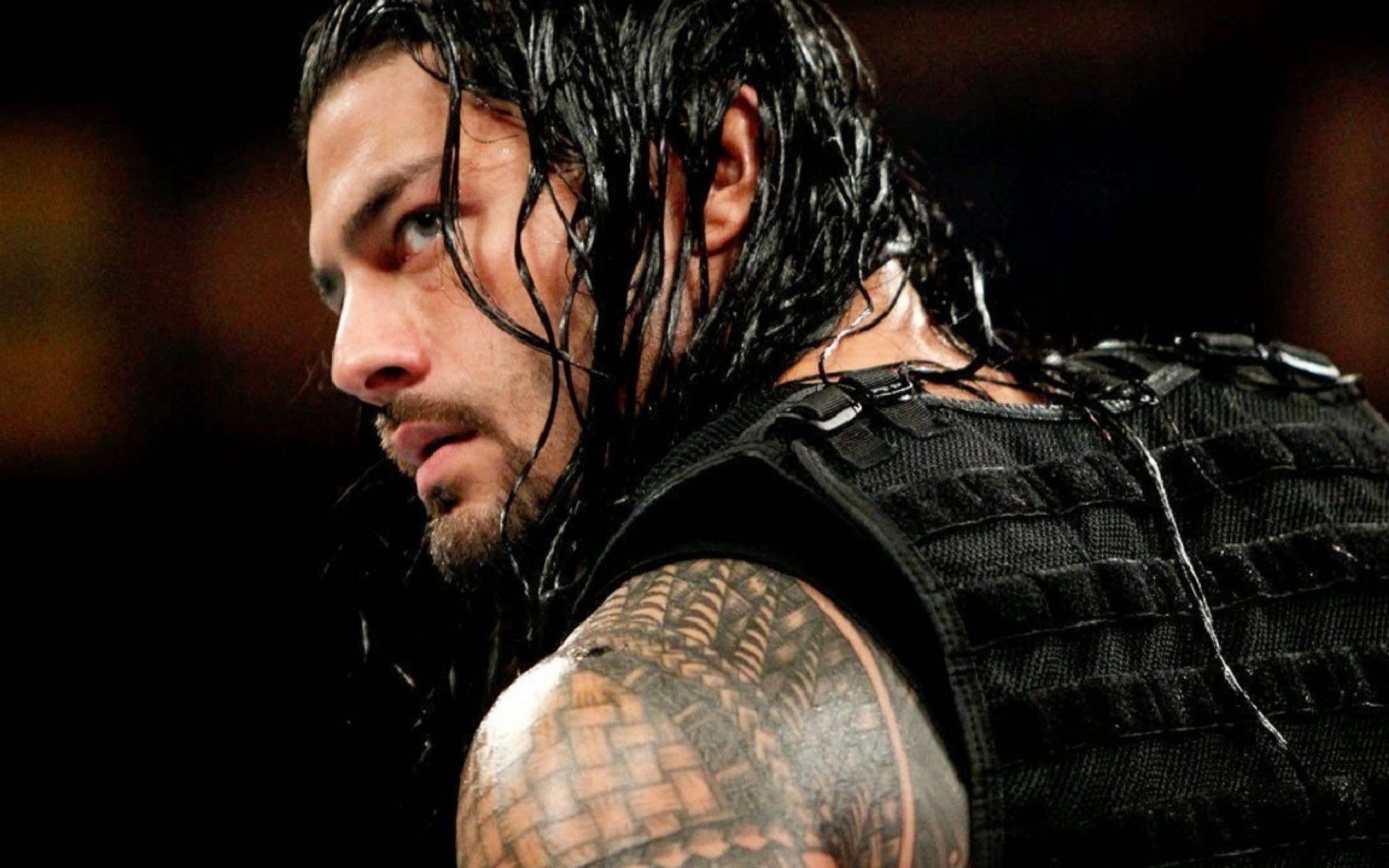 IT’S FEELS SO GOOD TO BE SO BAD

Earlier this year, WWE Superstar Roman Reigns accomplished something that no “baby face” (pro wrestling lingo for a so-called “good guy”) has accomplished when he was named Pro Wrestling Illustrated’s Most Hated Wrestler of 2016. Additionally, the man is mercilessly booed in a way no “baby face” has ever been booed before (including John Cena, his predecessor in many ways and a man who himself is serenaded with “Cena sucks” chants every time he wrestles) by the WWE’s majority-male audience. This being the case, any reasonable, rational, and logical person (especially one who doesn’t watch or even like pro wrestling) would undoubtedly assume that Reigns (real name Leati Joseph “Joe” Anoaʻi) is on his way out of the company and should probably be on CareerBuilder or Indeed.com looking for a new job. But here’s the kicker: He’s not. And not only that, but he is being rewarded by the WWE tomorrow night with the main event of WrestleMania 33—the Superbowl of professional wrestling—against one of the greatest and most legendary professional wrestlers of all-time, the Undertaker. 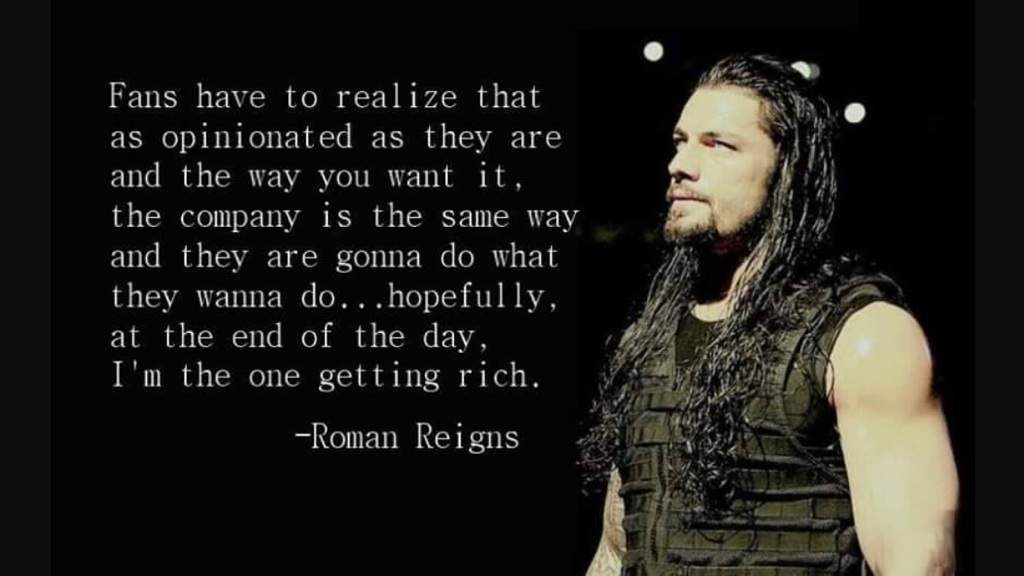 “How is this even possible?” you may wonder, because I’m sure you know as well as I do that in any other line of work, if one was to be as hated, as loathed, as despised as Reigns seemingly is by most of WWE’s fan base by his or her employer’s customers, he or she would be in an unemployment line somewhere as we speak. But Roman Reigns? Oh, no, no, no—not Roman Reigns, because (and this may come as quite a shock to you) despite how vocal 80% of WWE’s live audiences are about how much they dislike Reigns and the fact that he is undoubtedly being groomed by WWE’s upper management to be the second-coming of John Cena (a guaranteed, first-ballot WWE Hall of Famer, if ever there was one) against their will, based seemingly primarily on his good looks and his relationship to his Hollywood A-lister cousin, Dwayne “The Rock” Johnson, he is the biggest mover of merchandise in the company out of all of his full-time wrestling co-workers. In other words, despite fan’s apparent disdain for him, he is a money-making machine, or a cash cow, if you will, for the WWE. As such, he will not be getting handed a pink slip by the company any time soon, and if there is any truth to recent rumors at all, he has already locked into the main event of next year’s WrestleMania with a match against former WWE and UFC Heavyweight Champion Brock Lesnar.

So what can we, as “Average Joes” and entrepreneurs of all shapes and sizes, learn from Mr. Reigns? It’s that…

When someone hates you, it means you’ve emotionally engaged them, which means that, contrary to what they may say, they care about you. If they didn’t, they wouldn’t hate you but would instead be indifferent (or entirely uncaring) towards you, which would translate into them not paying any attention to you and definitely not buying anything from you, which is, of course, far from the behavior exhibited by your typical, run-of-the-mill haters who seemingly can’t help but watch every video of you they can find, hang on every word you say, and follow your every move as if their lives depended upon it.

I wrote about this hater behavior extensively in a previous blog post of mine, entitled You Can’t Say You’ve Made It If You Haven’t Been Hated (The Truth About Haters and Trolls), in which I told of my own success in the world of YouTube fitness and self-publishing in the face of adversity, and as I alluded to in that post, science has already proven that when someone hates you, they are literally less than an inch away from loving you, and both I and the WWE (and really all savvy marketers) know this, which is why we don’t care whether we or our products are cheered or jeered. At the end of the day, we’re running for-profit businesses and we know that emotion is what drives people to spend money, so it doesn’t matter if it’s love or hate that our fans or customers feel as long as it gets them to visit our website one more time, to read one more of our books, or to, in the case of the WWE, buy one more Roman Reigns t-shirt (or ten, or twenty, or one hundred).

TO BE HATED IS TO BE LIBERATED

Once we realize that it doesn’t matter whether people love us or hate us, and that we can take anyone who is emotionally invested in us and get them to financially invest in us with little effort, we are freed from the “need” to seek approval from others; to try to make them like us; to pander to other peoples’ preferences just to make a buck. As soon as we’ve gotten someone to love us or hate us, we’ve won, as far as the sales and marketing game is concerned, because we’ll have already won their approval or disapproval, which is really all we need to cash in on their emotion.

Contrary to what society may lead you to believe, it is not the approval of others that is the most profitable commodity in the world, but rather a group of people that are so polarized by us, with one side loving us and the other side hating us, that they just can’t stop talking about us. Polarization is why people like Kim Kardashian are famous for being famous (or, more specifically, for starring in a “leaked” sex tape), why people like O.J. Simpson, who most believe murdered his ex-wife, and Danielle “Cash Me Ousside Girl” Bregoli, who is famous for being a violent, spoiled brat,  are currently being considered for their own reality T.V. show, and why people like Eminem and J.K. Rowling are considered legends in their fields, despite the fact that their albums and books have literally been burned amidst protests against them and their “misogyny” and “witchcraft”. Polarization—and not avoidance of conflict or a lack of emotional engagement with the world at large—is what you want (or should want) if you want to be successful, and therefore anything that polarizes groups of people or causes them to feel two entirely different ways about you is not a negative but a positive for you.

That said, the “problem” (if it can even be called that), as I see it, for anyone like me or Roman Reigns—people who’ve become the subject of a disproportionate (and in my opinion, entirely undeserved) amount of public scorn—is not “how do we get people to like us more, or to at least stop hating us so much?” but rather “how do we take all of this energy—this negativity, this hate—that people are pouring onto us and turn it into a positive? How do we take it and transmute it or convert it into dollar signs?”

For me (and seemingly for the WWE as well, as they appear to have taken the same approach as I have in this regard), the solution is and always has been a simple one:

DO MORE OF WHAT MAKES PEOPLE HATE YOU

It’s like Eminem famously rapped in his hit song “The Way I Am”: I am whatever you say I am. Roman Reigns is whatever his haters say he is. And all of the people in this world that are hated for one thing or are another are whatever their haters say they are. And you know what? There is nothing anyone can do or say to change that—except for the haters themselves, who have made a personal choice to hate, rather than be loving towards, others—so instead of trying to erase peoples’ hate of us or to run from it, we should do the opposite and embrace it; revel in it; swim in it until we feel as comfortable making our way through it as a fish makes its way through water; until we recognize it not for what society will tell you it is, which is a sign that no one likes you and that you are doomed to failure, but for what it really is, which is a sign that you are doing something right, by making people care about something, which is something that most people—even experienced marketing professionals—struggle to do on a daily basis.

If people want to hate you rather than congratulate you and if they want to spend all of their time crying about how you don’t deserve success (because they’re envious or jealous of you, which is their problem, not yours) or how they don’t agree with the things you think, feel, believe, say, or do (because they’re completely intolerant to people not like them, which is their problem, not yours), then I say give them something to cry about (or more to cry about then they’ve ever had before) and then bill them for it, like I do, like the WWE does, and like anyone who’s ever done anything worth being hated for has done.

At the end of the day, if you haven’t done anything worth being hated for then, as far as I’m concerned, you haven’t done anything, and if you spend your whole life not doing anything and caring more about what other people think about you then about getting them to care about you, don’t be surprised when you live long enough to see yourself become the greatest hater of them all—hating yourself not for who you are or for what you could be, as your haters did, but for who you never were and for what you never had the guts to become.